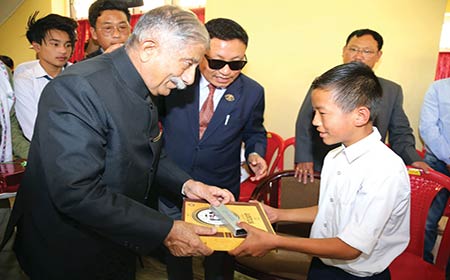 NAFRA, Oct 15: Governor BD Mishra on his maiden visit to Nafra, an ADC headquarters in West Kameng district, felicitated meritorious students of the sub-division on Monday.
The governor expressed hope that the students will continue to excel in the academic sphere and be role models for their peers and friends. He also commended their teachers and school authorities.
Later, he felicitated the gaon burahs of the administrative circle.
Speaking on the occasion, the governor advised the students to study hard to become useful citizens of the country, and not just for the certificates. He asked them to study to enhance their potential and capability to become entrepreneurs and job providers.
Addressing the gaon burahs, the governor said that they are the eyes and ears of the government, and must be actively involved in the development process and ensure proper implementation of government programmes and policies.
Wife of the governor, Neelam Misra, Union Minister of State for Youth Affairs and Sports (Independent Charge), Kiren Rijiju, MLAs Phurpa Tsering, Dorjee Wangdi Kharma, Dongru Siongju, DC in-charge Gombu Tsering, SP Raja Banthia and Nafra ADC Kesang Ngurup Damo were present on the occasion amongst others.
The governor and his wife also joined the Chindang festival celebration at the Songji ground, here on Monday. Extending his festival greetings, the governor expressed hope that the festival will usher-in development, peace and prosperity. He commended the festival committee for organising the 28th central Chindang festival in a grand manner.
The governor called upon the people to protect, preserve and promote their cultural heritage, and advised the youth to actively participate in the celebration.
Addressing the mammoth gathering, the governor said that development depends on education and proper implementation of developmental programmes and projects, which he said, are “very much in the hands of the people.”
He also called upon the elders of the society, parents and guardians to ensure that every child of the age of six years and above goes to school. Emphasizing on the education of the girl child, the governor said that society progresses when women are educated, empowered and respected. He stressed on making every girl child capable of standing on her own feet.
The governor said that there are a lot of developmental programmes and projects for the people, particularly for rural areas. He urged upon the populace to avail of maximum benefit from these schemes of the state and central governments.
A colourful cultural programme showcasing the rich cultural heritage and traditions of the Sajolang tribe was presented on the occasion. Amidst chanting of prayers, Geji Guro (Chindang offering) was distributed amongst the participants. (PRO to Raj Bhavan)