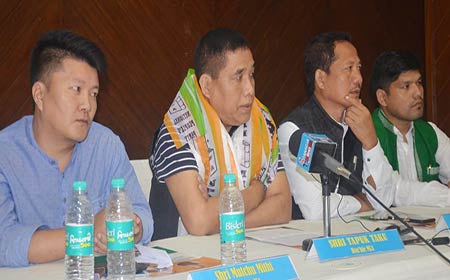 ITANAGAR, Oct 15: National Peoples’ Party (NPP) legislator from Seppa East constituency, Tapuk Taku has been elected as the new NPP Legislature Party leader on Tuesday.
Speaking to reporters, Taku said that the party is in alliance with the central BJP government as it is a part of the North East Democratic Alliance (NEDA), and would support the party in its developmental activities. He also assured all efforts to further expansion and growth of the NPP in the state.
“Though the party is new to the state, we are working at all levels to connect with the people of the state with the party ideology of Indian nationalism, regionalism, tribal issues and indigenous rights,” he said.
Meanwhile, NPP national general secretary Mutchu Mithi said that the party in the recent two years “has spread like wildfire with all positive impact to the people.”
Regarding the issue of the implementation of CAB in the state, Mithi said that NPP party president Conrad Sangma has already discussed the matter with Minister of Home Affairs Amit Shah during the NEDA meeting.
“It was clearly stated by the Union home minister then, to incorporate the BEFR, 1873 before the implementation of CAB in the state,” he added.