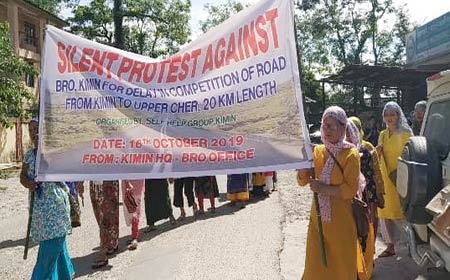 KIMIN, Oct 16: Over 50 women staged a protest here on Wednesday morning following the delay in construction of the 20 km highway stretch from Kimin to Upper Cher under Papum Pare district.
Women from different self help groups of Kimin, and nearby places of Lichi, 7 Camp and Upper Cher hit the streets of Kimin and marched to the Border Roads Organisation (BRO) office here demanding immediate construction of the said road.
Reportedly, the road was sanctioned to the BRO in March 2012 and the deadline for completion was March 2017. Protestors informed that when the road could not be completed 2017, the government extended the completion to March 2020.
A resident of Cher village, Phil Tadap informed that “only 12 kms, out of the total 20 kms, of the said highway has been black topped while the remainder of it is still untouched.”
He also informed that several drainage and bridge works are yet to be completed.
Reportedly, two minor bridges have been left incomplete for a year, besides three culverts and around seven kilometres of drainage.
Meeting the women protestors at the BRO office here, Colonel VS Bhandari of the BRO assured the SHG members that the road will be completed by the extended deadline of March 2020.