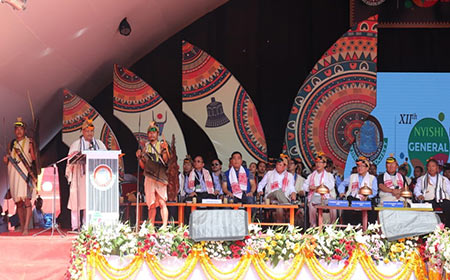 WESSANG, Oct 28: Nyishi Elite Society (NES) president Bengia Tolum on Monday urged the members of the community to “avoid jobs and contracts culture during elections.”
He was addressing the inaugural function of the 12th general conference of the NES, being held here in East Kameng district. Around 3,000 delegates from
the seven Nyishi inhabited districts of the state and Nyishis residing in Assam are participating in the conference.
Addressing the mammoth gathering, Tolum said students these days are becoming less interested in studies and other opportunities because of such culture.
Seeking support from Education Minister Taba Tedir in promoting the NES’ school adoption programme, Tolum said, “Charity begins at home. It is the responsibility of the legislators to support us, as we need much emphasis on the education sector.”
He said the society is always helpful towards those who serve and work in the greater interest of the society.
“Recognition of individuals who serve the community may be delayed, but they will be always remembered and cherished,” the NES president said.
On the wrong publicity created by Assam-based media on the recent inner line permit (ILP) checking drive carried out by the All Nyishi Students’ Union (ANSU), Tolum said, “We have been good brothers for many decades, and people should not misunderstand the ILP checking organised by the ANSU.”
He added that a few media channels had created misunderstanding between Assam and Arunachal “with their half-baked information,” and also requested writers in Assam to not use the word ‘Dafla’ in their writings.
“The word is derogatory and has been removed constitutionally years ago,” Tolum said.
He said the bopia (headgear) is a symbol of dignity for the entire Nyishi tribe, and “therefore the NES has come up with the idea that from this conference onwards, all the new presidents will have to wear it, so as to preserve the culture and tradition of our tribe.”
Home Minister Bamang Felix in his address informed that “90 percent of the crimes in the state are committed by criminals from outside the state who have illegally entered the state.” He requested the Assam Sahitya Sabha (ASS) president to work to ensure peace and tranquillity in the boundary areas.
“We may be divided by traditions, boundary and languages, but we are socially united as neighbours and great citizens of India,” Felix said.
Calling for people’s participation in all-round development, he said, “We are failing in the developmental aspects due to the land compensation trend,” and requested the NES to “create more awareness among the people to avoid land compensation and demand better roads and other projects in the districts.”
Without the people’s participation in self-employment, the government is also helpless, he said.
“We should not wait for the government to provide all the government jobs, but rather go for business and entrepreneurship,” the home minister advocated.
Felix also said that most of the constables’ posts have been left out not only in the Nyishi inhabited districts but in all the districts. “Many posts have been left out due to less qualified and uninterested youths,” he said.
Felix also informed that Chief Minister Pema Khandu has assured to have a bridge constructed to connect Seppa town and New Seppa. He asked the legislators of the district to engage the East Kameng Social Welfare & Cultural Organization to follow up the matter “and implement it in a creative and effective way for public welfare.”
ASS president Dr Parmananda Rajbongshi in his address gave assurance that the misinformation regarding the ILP checking would be cleared. He also said that “if there is any kind of problem and misunderstanding among the neighbours,” one can inform him, so that the ASS may sort out the problem.
“The NES is part of the ASS, which I openly declare, for welfare works for both the communities of the state,” Dr Rajbongshi said. He also assured to work for the rights of the indigenous people, and for the state and the country as a whole.
“We will maintain peace by love in heart, not by armours in hands,” he said.
Praising the culture, tradition, language, food and attire of the Nyishi tribe, Dr Rajbongshi welcomed suggestions from the NES relating to preserving tradition and culture, and generating a common script.
“Language is the only weapon to protect any tribe, culture and tradition, in which a local legislator has to play a pivotal role to do so,” he said.
Earlier, late Nicham Sonam was awarded the NES Presidential Award for his contribution to the growth of art and culture in East Kameng district.
Among others, the inaugural function was attended by Itanagar MLA Techi Kaso, Pakke-Kessang MLA Biyuram Wahge, Seppa MLA Tapuk Taku, Bameng MLA Guruk Pordung, Sports Minister Mama Natung, Home Minister Bamang Felix, former ministers Kumar Waii and Kameng Dolo, Education Minister Taba Tedir, and MLAs Tarin Dakpe, Lokam Tassar, Nabam Tuki, Balo Raja, and Jikke Tako.
Later, the NES’ executive members held a discussion on the NES resolution, and the administrative reports were presented.