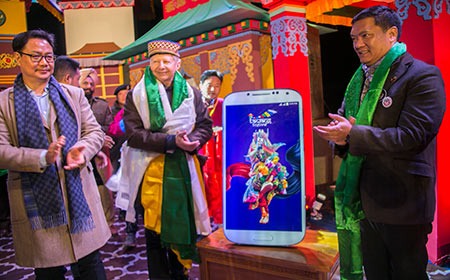 TAWANG, Oct 28: The United States’ Ambassador to India, Kenneth I Juster, is in Tawang.
Pitching for conducting cultural exchange programmes to strengthen friendship and bonding, Juster informed that the USA has been funding several states in India for preservation of their cultures and traditions.
He said this during the seventh edition of the Tawang Festival, which he declared open here on Monday.
“This (cultural exchange) is one major sector where the United States and Arunachal Pradesh can partner,” said the US ambassador.
Juster informed that the University of Florida collaborated with Arunachal’s lone central university, Rajiv Gandhi University, in carrying out combined research works. He also said the US has been funding Arunachal in improving its health sector.
“They modernized hospitals and health facility centres in Namsai and Pasighat,” the ambassador said, adding that more health centres in the state would be upgraded with modern technologies.
Chief Minister Pema Khandu, who had earlier informed Juster about the rich diversity of Arunachal, said the state is fortunate to have hosted two US ambassadors to India in a span of three years. He also briefed the visiting dignitaries on the strengths, challenges and opportunities in the state.
“Arunachal Pradesh has huge potential in the form of natural resources. With proper planning and investment, the state has the potential to become one of the most prosperous and happiest states in the country,” Khandu said.
Stating that Arunachal is “now coming up for investment avenues in the areas of tourism, agriculture, horticulture and hydropower,” he sought support from the US embassy to attract American investment.
The CM further informed that the Defence POW/MIA Accounting Agency has contracted out logistics to a local entrepreneur to find the wreckages of the planes that crashed in The Hump during WW-II.
“Till now, 20 aircraft have been identified and five martyrs’ remains and personal belongings have been recovered and sent to families. A Hump museum is under construction in Pasighat and scheduled for inauguration in March 2020,” Khandu informed, and requested the ambassador to visit Pasighat for its inauguration.
The CM also spoke on the Abor Country Travels and Expedition, a travel agency from the state which has been working with the geology & earth sciences department of the University of Washington, Seattle, and the UCLA for the last 10 years.
“PhD students from these universities visit the Siang valley of Arunachal Pradesh for their field trips at regular intervals,” Khandu said.
Presenting a brief on tourism, he said Arunachal received only 336 US tourists in the last three years, and expressed hope that, with the help of the US embassy, “the number would increase tenfold in the coming two years.”
Union MoS for Sports & Youth Affairs, Kiren Rijiju, said the festival was gradually becoming “the face of Arunachal.” He said he would do his best to provide all possible support from the Centre “to ensure that the vision of the CM for the state is realized.”
Earlier, Tourism Minister Nakap Nalo presented a brief on the tourism activities in the state.
Among others, US Consul General Patti Hoffman and other embassy delegates were also present. (CMO)