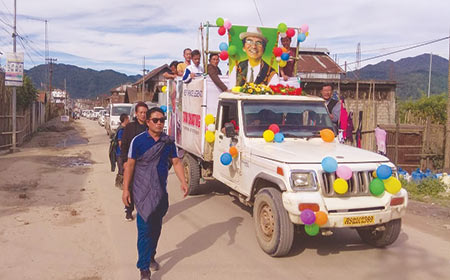 ZIRO, Oct 28: The mortal remains of veteran journalist Taro Chatung were laid to rest at his native village, Kudumbarang, Hija, in Lower Subansiri district, on Monday, with people from all walks of life turning up to pay their last respects to the beloved son of Ziro.
The first journalist of Arunachal, Chatung passed away last Saturday. He had been diagnosed with cancer, and lost the battle at around 10.30 am at the TRIHMS in Naharlagun.
He was 56, and is survived by his wife, three sons, and a daughter.
In keeping with Chatung wishes, he was given a traditional burial, without using concrete. He had also expressed desire that a tree be planted at the spot where he is buried.
Meanwhile, condolences continue to pour in from various sections of the society over the demise of the veteran journalist.
In a condolence message, state JD (S) president Rokom Apang on Monday said, “Late Taro Chatung had led journalism to a different level in our state. May his achievements inspire upcoming journalists.”
He expressed condolences to the bereaved family, and prayed for eternal peace of the departed soul.
The Arunachal Pradesh Congress Committee (APCC) in its condolence message recalled the contributions of the late journalist in upholding the sanctity of the media houses and guiding the young journalists of the state as a mentor.
“Late Taro Chatung made a mark as a diligent journalist and social worker of the state. He will be always remembered for his simplicity, and as a brave journalist who always stood for the cause of the society through journalism. His untimely demise has left a vacuum which will never be filled,” the APCC said.
The Arunachal Artistes Forum has also deeply mourned Chatung’s demise, terming it “a great loss for the artistes, the film community, the journalists, and the entire state.”
Chief managing director of Aaz ki Awaaz (Group), Hiba Kaha, also extended his condolences to the bereaved family.