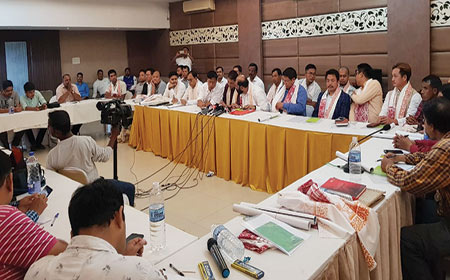 GUWAHATI, Oct 31: The North East Students’ Organization (NESO) has said it is going to intensify its movement against the implementation of the citizenship amendment bill (CAB) by staging protests across the capitals of the Northeast states on 18 November.
NESO chairman Samuel B Jyrwa informed that the organisation will also submit a memorandum, expressing its opposition to the bill, to the prime minister and the union home minister through the governors of the respective NE states.
The decisions were taken during a meeting of the NESO here in Assam on Thursday. It was attended by representatives of the NESO’s constituent units, which include leading student unions of all the seven NE states.
The members also discussed numerous issues concerning the welfare of the indigenous inhabitants of the Northeast, including, but not limited to, the national register of citizens (NRC), the NEEPCO, the NRL, inner line permits (ILP), education, economy, employment, and mega dams.
Although the Centre has mooted the implementation of the NRC on a national scale, the NESO said NRC-like exercises should be executed state-wise, taking into consideration “the modalities suitable to the conspicuous aspects of the states.”
The organisation also reiterated its demand for overall implementation of the ILP system in all Northeast states.
The proposed National Education Policy was also discussed, which the NESO claimed had certain sections that were “ill-favoured towards the region.”
It expressed resentment at the emphasis being given to the Hindi language and belittling of the English language. However, it was agreed that an approach for prioritizing the indigenous languages would be a favourable factor for the Northeast region.
Citing lack of educational institutions, especially those imparting professional courses, in the region, the NESO said it would seek more packages from the central government for the establishment of universities and colleges for medical and engineering studies, apart from coaching centres for such courses.
The NESO said it would itself take on the task of setting up coaching centres for professional courses.
The organisation’s other issues include opposition to the proposed merging of the NEEPCO with the NHPC, and “the government’s plan to sell out the Numaligarh Refinery Limited to private parties.” It said a separate memorandum would be sent to the power & petroleum ministry in this regard.
The organisation also demanded separate economic and employment policies for the region.
“With regards to central government sectors located in the Northeast, the NESO would seek 100 percent job reservation in Groups C & D for the indigenous inhabitants,” it said.
Saying that the presence of military and paramilitary forces within educational institutions in Manipur and elsewhere in the region hampers the educational atmosphere, the NESO demanded that such forces be asked to vacate immediately.
The NESO is a conglomeration of the All Assam Students’ Union, the All Arunachal Pradesh Students’ Union, the All Manipur Students’ Union, the Garo Students’ Union, the Khasi Students’ Union, the Mizo Zirlai Pawl, the Naga Students’ Federation, and the Twipra Students’ Federation.