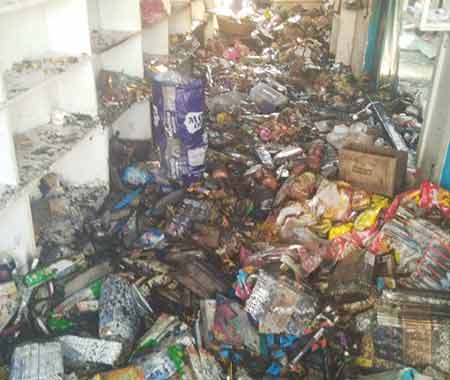 Staff Reporter
ITANAGAR, Nov 2: At least six shops were reportedly gutted while a few others were partially damaged in a fire accident that occurred at Shivaso market in Lohit HQ Tezu early Saturday morning.
DC Prince Dhawan said the fire reportedly broke out from a hotel at around 12:40 am. He said the cause of the fire is yet to be ascertained.
SP DW Thungon informed that the fire station received a call about the accident at around 12:49 am.
“The fire call was received at the Tezu fire station at around 12:49 am,” Thungon said. “Immediately, four fire tenders were pressed in to douse the fire. The Tezu airport authorities were also contacted to send their fire tender, which arrived at the spot,” said the SP.
He said it was through the efforts of the firemen, the police, the Army, the ITBP, the Tezu airport authority, and the residents that the fire was brought under control at around 5 o’clock in the morning.
Two earthmovers were also used for destroying adjacent shops in order to stop the fire from spreading further, he said.
“Thirteen shops were on fire, out of which six shops are completely gutted down,” the SP added.