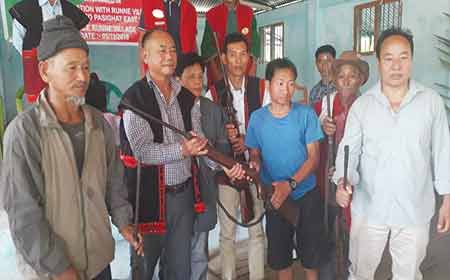 RUNNE, Nov 5: In an initiative to conserve wildlife, the villagers of Runne, in East Siang district, voluntarily handed over their air rifles to Pasighat DFO Tashi Mize in a small function held here on Tuesday.
The birthplace of Daying Ering, Runne village, with barely 48 households, made a commendable attempt by submitting 12 air rifles to the authorities.
The DFO motivated the villagers to conserve the biodiversity and asked all to shun wanton killing of wild animals and instead get involved in ecotourism activities for earning sustainable income.
Thanking the villagers for their yeoman services, Adi Baane Kebang (ABK) secretary-general Okom Yosung asked them to support the department in its conservation activities.
The ABK’s district unit general secretary Talut Siram, who is consistently working on preservation and conservation of the biodiversity, also appealed to the gathering to engage in agriculture and tourism activities instead of wasting time hunting.
He also highlighted the ill-effects of hunting on the environment.