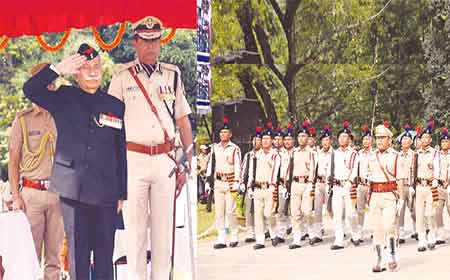 BANDERDEWA, Nov 8: Governor BD Mishra emphasized on having “zero tolerance towards drug abuse,” in view of the rising drug addiction among the youths, and advised the state’s police force to take up special drives against it.
The governor was speaking during the 47th raising day celebration of the Arunachal Pradesh Police (APP) at the Police Training Centre here in Papum Pare district on Friday.
Earlier, the governor inspected the raising day parade, and took salute of the marching contingents.
The governor said the people have high expectations from the police force and therefore the police must rise to the occasion.
“Every policeman must ensure self-discipline, physical fitness, mental alertness, perceptive mind, honesty, sacrifice, hard work and respect for the law,” Mishra said, and urged the officers and personnel to “voluntarily join posting in any place, whether it is soft, tough or operational.”

“They must take it as their obligation to duty,” he said.
Underscoring the need for recruitment on merit, proper training, and providing exemplary leadership by every senior police officer, “starting from the head constable to the director general,” the governor said the state government would “continue its steps for the welfare of the personnel and infrastructure for the organization.”
He also advocated promoting cooperation among the Indian Army, the paramilitary forces, and the civil police for the overall security of the country.
Mishra advised the officers and personnel of the APP to “know the people under their jurisdiction, keep their eyes and ears open and mouth shut, ensure impartial and proper investigation, cultivate confidence among the people about the police and policing, and help every individual in need, across the board, without any discrimination.”
The governor later presented the Indian Police Medal to DIGP (HQ) Kime Kaming, the Jeevan Raksha Padak Medals to Inspectors Padi Paying and Abraham Taying, and the Union Home Minister’s Medals for Excellence in Police Training to Head Constable Talin Motu and Constable Tsering Tashi.
He also presented the ‘best parade contingent’ award of the 47th raising day parade to Dayun-based 2nd IRBn.
Earlier, the governor laid a wreath at the martyrs’ memorial. He also inaugurated the exhibition stalls set up by the various branches of the APP.
Home Minister Bamang Felix, Chief Secretary Naresh Kumar, DGP RP Upadhyaya, and officers and personnel of the state police were present on the occasion.
In Lower Siang HQ Likabali, SP Surendra Choudhary hoisted the APP flag, in the presence of police personnel and staff, on the occasion of the APP’s raising day.
In his address the SP urged the police personnel to “uphold law and order and give their cent percent in the service of the public.”
Various competitive events were organized during the week to mark the raising day, and prizes were distributed to the winners.
SI Tali Kaye was awarded cash prize and a commendation certificate for ‘outstanding investigation in a murder case’. Two persons, Yumjum Nguba and Mikre Taso, were also commended for assisting the police in solving a murder case. (Raj Bhavan, with input)