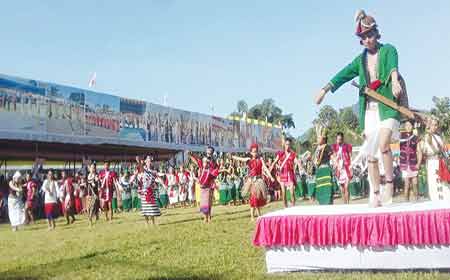 BASAR, Nov 9: “Well-established religions should not try to religiously convert people practising indigenous faiths and rather should strive to promote and protect them,” said Indigenous Affairs Minister Taba Tedir.
Tedir made the statement during his speech after formally inaugurating the 6th edition of the state level Indigenous Youth Festival here in Lepa Rada district on Saturday.
The festival is being organized by the Indigenous Faith and Cultural Society of Arunachal Pradesh and will conclude on 12 November. Hundreds of delegates representing various tribes of the state are participating in the five-day festival to showcase their respective culture and tradition.
Stating that the people practising indigenous faiths are decreasing in number each year, the minister said that “people concerned should not forget who they are, especially youths,” and take it as their own responsibility and duty to protect and preserve their indigenous cultures and traditions.
He also suggested taking active part in the International Day of the World’s Indigenous Peoples which is observed every year on 9 August.
He informed that the state government led by Chief Minister Pema Khandu has initiated a lot towards the protection and promotion of indigenous culture and tradition “which is evident by the fact that the department of Indigenous Affairs exist, and that the chief minister has also allocated funds for various initiatives to promote indigenous culture.”
Responding to the memorandum submitted to him earlier by the organizing team, Tedir termed their appeal genuine and assured to pursue construction of a Donyi-Polo Cultural Hall here, with the chief minister.
Meanwhile, Liromoba MLA Nyamar Karbak, who also attended the inaugural event, said “losing money is nothing as it can be earned back, losing character is a substantial loss but losing culture is losing everything.”
Adding that indigenous people who do not practise their culture and tradition cannot be called indigenous, Karbak said that people should avoid such religions which discourage its followers from practising their indigenous culture and traditions.
Local MLA Gokar Basar also emphasised on respecting, protecting and promoting local cultures and traditions. He also emphasised on including traditional games in annual events of educational institutions and also in state Olympic events.
Besides exhibition and local cuisines stalls, the cultural extravaganza, literary, games and sports events, seminar and symposiums, etc will mark the five-day festival.