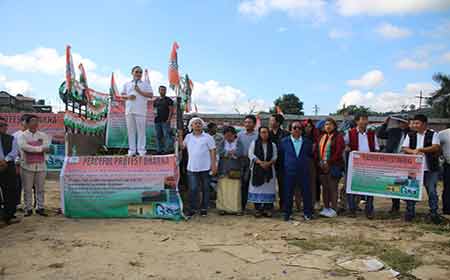 ITANAGAR, Nov 13: Former chief minister Nabam Tuki has come out against the Citizenship (Amendment) Bill (CAB) as he termed it as genocide to the interest of the locals.
“The state Congress party will fight arduously against this and we appeal the leaders of the ruling party to take the sentiments of the locals into consideration and not work against the interest of the people”, Tuki said while addressing a peaceful protest organized by the Arunachal Pradesh Congress Committee (APCC) on Wednesday here at the IG Park, against the BJP govt’s ‘failure in governance.’
Tuki also expressed strong disapproval of the recent decision of GoI on the merger of NEEPCO stating “NEEPCO is company of the NE states. Privatization will grab away the rights, privileges and sentiments of the indigenous people of the NE states.”
APCC Vice chairman Rajen Nani, while speaking on the issue of ‘unprecedented economic slowdown and collapse of banking system’ blamed the Modi govt, calling it an aftermath of the forceful imposition of demonetization in 2016,
“Financial institutions like public sector banks, non-banking financial companies, co-operative apex banks and housing companies are the backbone that helps in running the country smoothly. The majority of the Indian population are rural based and are mainly dependent on such institutions for financial needs, yet 9659 Co-operative banks registered under RBI till date has become defunct. Economic crisis is underway but the government isn’t moving a finger to address these issues”, Nani added.
Addressing the issues of unemployment, Arunachal Pradesh Youth Congress president Geli Ete stated, “The highest rate of unemployment rate of 8% in 45 years in India is the result of Modi govt. Almost 77% of Indian families earn a monthly income under 10000. Even in the state we hardly see advertisement of new posts and recruitment. Of course these are results of discrepancies in BJP governance”.
“Even the recent army recruitment in Along was a mess. Hundreds of applicants came but the selection was unclear”, stated Ete and further appealed the youths to come out of their shell and understand the ground reality of the situation ahead.
Former minister Bosiram Siram spoke on the issue of hike in prices of the essential commodities and petrol, while Assam PCC vice president Dwijen Sharma lamented over the country turning into a capitalistic state.
Besides senior congress leader Takam Sanjoy, the protest also saw the participation of APYC and its parental organization, youths and elderly alike.