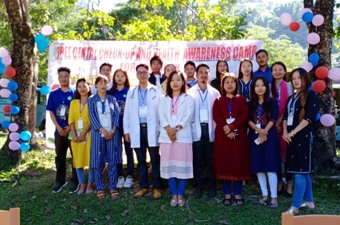 Children’s Day celebrated
ITANAGAR, Nov 14: Commemorating the 130th birth anniversary of the first Prime Minister of India, Jawaharlal Nehru, Children’s Day was celebrated across the state on 14 November with an array of activities involving young minds.
Here in the capital, Governor BD Mishra appealed to the people “not to take away the leg space and lung space of the students by encroaching upon school lands.”
The governor advised Education Minister Taba Tedir to initiate action against encroachers “to stop and recover school land across the board.”
Mishra also advised the minister to streamline the midday meal scheme and create awareness against food wastage, describing it as “wastage of national resources.”
Spending Children’s Day with differently-abled students of Chimpu-based Donyi Polo Mission School for the Hearing and Visually Impaired and various government schools of Itanagar at the Raj Bhavan here on Thursday, the governor advised them to become useful citizens of the country.
“Children’s Day is a day of introspection for parents and guardians, to review whether they are providing the correct education and living standard to their children or wards,” the governor said. He said it was the responsibility and duty of parents and teachers to provide every opportunity to their wards to excel in life.
Mishra also advised parents to “prepare themselves first by way of mustering necessary resources before bringing a child to this earth.”
He further advised the parents to send their children to school and ensure their timely vaccinations.
The education minister advised students to maintain cleanliness and preserve the state’s natural flora and fauna.
The students presented a colourful cultural programme on ‘the spirit of patriotism, preservation and protection of flora and fauna, and the rich cultural heritage of the state’.
The governor’s wife, Neelam Misra, and Commissioner to Governor, RP Upadhyaya, also attended the programme.
Later, the governor, accompanied by Tedir, visited the Raj Bhavan government primary school in B Sector here, and advised the minister where further improvement is required in the school.
Mishra advised Tedir to improve the education scenario of the state, with special focus on the elementary education.
“With better education to children at the primary level, particularly in remote areas of the state, we will be setting up a strong foundation for our future generation,” the governor said.
The Itanagar-Capital Complex Child Welfare Committee, in collaboration with Childline Itanagar, observed the day by organising a free dental and health awareness camp at the ‘labour colony’ in Senki View here. They were supported by members of the Singcha Ghene Welfare Society and students from Rajiv Gandhi University and the Himalayan University, who sensitized children and parents to various child-related issues.
St Johannes School in Longding district celebrated the day with the motive of increasing awareness on the rights, care, and education of children.
The government middle school in Millang, in Upper Siang district, also celebrated the day.
Guardian Angel Residential School here celebrated its 16th annual sports day along with Children’s Day on 14 November.
Attending the programme, Capital SP Tumme Amo spoke on the drug menace and called on children to seek the help of the police in any matter.
Meanwhile, various literary and games & sports competitions were organized at the government residential school in Chessa-I, in Papum Pare district, by the All Chessa Sonajuli Durpong Youth Welfare Association, led by its education secretary Techi Tajik, on Children’s Day.
Former AAPSU president Nabam Sina also attended the programme. (Raj Bhavan, with input from DIPRO and others)