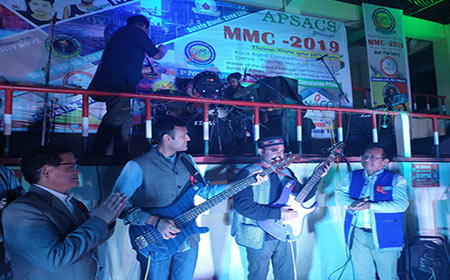 TEZU, Nov 18: Arunachal Pradesh State AIDS Control Society (APSACS) launched its multi-media campaign (MMC) for HIV/ AIDS awareness from here in Lohit district recently.
Attending the programme, Lohit Deputy Commissioner Prince Dhawan advised the youth to take all preventive measures to avoid HIV/ AIDS.
Appreciating the concept of MMC to reach out to the youth through music, Dhawan said that music has no barriers and it is the most effective medium to reach out to the people.
Expressing concern over the rising cases of drug abuse among the youths in the district, he advised the youth to stay away from drugs and other substance abuse, which he said, may ruin their lives.
Assistant Commissioner Sunny Kr Singh said HIV/ AIDS can be prevented through proper knowledge about it.
Director of Health Services Dr Moromor Lego stressed on the concept on convergence among other vertical programmes during the MMC event. “All the health programmes are aimed at securing a citizen, who is healthy, physically fit and mentally sound,” he said, adding that “there is no health without mental health.”
The MMC is initiated by the National AIDS Control Organisation at creating awareness among the youth of the North East region about HIV/ AIDS, informed APSACS Project Director Dr Riken Rina.
He advised the youth to maintain healthy body for a healthy mind, stating that healthy youth are the future of the nation.
Lohit DMO Dr S Chai Pul appealed to everyone to avail the services, like free anti retro viral therapy (ART) and integrated counselling and testing provided under the APSACS.
APSACS Deputy Director Tashor Pali stressed on the importance of creating a chain of information about HIV so that everyone contributes towards HIV prevention and control.
Down Town band from Tezu emerged as the winner of zone 1 to participate in the grand finale of the MMC on 1 December, scheduled to be organized coinciding with World AIDS Day.
Megh, the winners of last year’s MMC rock band competition from the state enthralled the young audience during the MMC show while educating youth about HIV/ AIDS and its preventive aspects.
Rappers Brick City Boyz also entertained the youth through its performance on the occasion.
The MMC aims at enhancing risk perception and promote safe behaviour by addressing issues around stigma and discrimination for people infected and affected with HIV and AIDS.
Through this campaign, the APSACS motivates different population groups to seek services like ICTC, PPTCT, ART, STI and care & support services. It also highlights the importance of blood safety and increase awareness on the availability of ART.