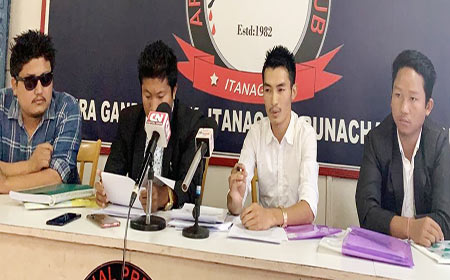 Staff Reporter
ITANAGAR, Nov 20: The Arunachal Anti-Corruption Students’ Union(AACSU) and the All Yobin Students’ Union on Wednesday said that they would launch a joint indefinite hunger strike from 27 November onwards demanding immediate deletion of non-APSTs (Arunachal Pradesh Scheduled Tribe) from the Panchayat electoral roll of Vijoynagar in Changlang district.
It is said that over 500 non-APSTs (especially ex-Assam Rifles settlers) have reportedly been enrolled in the Panchayat electoral roll so far.
In a press conference held here at the Arunachal Press Club, AACSU president Tana Ganesh Tara claimed that the state government is “giving illegitimate privileges to non-APSTs settled in Vijoynagar.”
“We are jointly launching an indefinite hunger strike on 27 November demanding deletion of all non-APST settlers enjoying privileges of the Panchayati Raj election in Vijoynagar” said Tara, adding: “This is an open violation and breach
of the Indian Constitution and the BEFR (Bengal Eastern Frontier Regulation) Act, which is for the indigenous people of Arunachal Pradesh, and is also a violation of the Arunachal Pradesh Panchayati Raj Act, 1997.”
He informed that several memoranda have been submitted to the government, “but the government did not pay heed,” and appealed to Chief Minister Pema Khandu and Panchayati Raj Minister Bamang Felix to look into the matter.
Seeking the state government’s attention towards the complex issue, All Yobin Students Union president Ngwazosa Yobin said, “ex-Assam Rifles settlers are on 30 years of lease agreement with the authority. However, the government is giving them panchayat rights, which is against the constitution and the Panchayati Raj Act of 1997.”
“We respect the fact that ex-Assam Rifles settlers have served the nation and they should be taken care of and helped by the government, but the help should come without hurting the sentiments of indigenous people,” Ngwazosa said and reiterated the demand to delete the names of non-APSTs enjoying Panchayati Raj privileges .