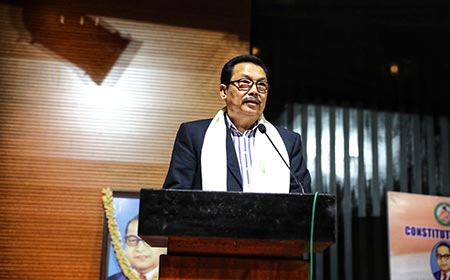 Staff Reporter
ITANAGAR, Nov 26: Deputy Chief Minister Chowna Mein said the Arunachal government would not make any compromise with the provisions under the Bengal Eastern Frontier Regulation (BEFR), 1873, and the Chin Hills Regulation (CHR), 1896, under which outsiders cannot enter Arunachal without inner line permits and cannot own immovable property.
Attending the Constitution Day celebration at the legislative assembly here on Tuesday, the DCM sought to dispel apprehensions following the revocation of Articles 370 and 35 (A) that had provided special provision to Jammu & Kashmir.
Informing that meetings and consultations have been held with various stakeholders of the state regarding the probable implications of the citizenship amendment bill (CAB) in the state and the way forward, Mein said, “The concerns of the indigenous people of the state regarding the CAB have been communicated to the central government and we shall stand firm on our commitment.
“Our government stands with the people of the state and we will not make any decision that will go against the interests and rights of its indigenous people. We believe that the central government will always heed to the concerns of the indigenous people of the northeastern states as our state is located in a vulnerable and strategic position. Our rich cultures and age-old traditions still need to be protected and nurtured with great care from the influence of the outside world and untamed modernization,” he said.
Mein also spoke on the differences between Article 370 and Article 371, and reiterated that the latter is “a special provision to protect the unique tribal culture and land, which is permanent in nature.”
The DCM said the Centre has time and again reiterated its position that the special provisions granted to some of the northeastern states under Article 371 will remain as they are of a permanent nature and not temporary, as was in the case of Article 370.
He also threw light on the political transition of Arunachal, and said, “The constitution of India has protected the state’s tribal land and culture by providing special provision to the state under Article 371 (H) from the very beginning.”