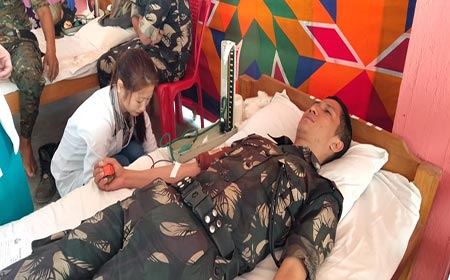 Staff Reporter
ITANAGAR, Nov 29: Fifty-eight units of blood were collected during a ‘mega voluntary blood donation camp’ organised by the Arunachal Pradesh Police (APP) and the Arunachal Voluntary Blood Donor’s Organisation (AVBDO), in collaboration with the State Blood Transfusion Council, at the fire and emergency services premises here on Friday.
Speaking on the importance of blood donation, AVBDO chairman Ramesh Jekke advised the police personnel
not to donate blood merely on orders of their superiors “but to save lives and keep their bodies healthy in return.”
Stressing the need for more volunteers in the state, Jekke introduced the donors to patients who require blood transfusion on a weekly basis, and informed that the family of a patient who requires ‘A negative’ blood group was also attending the event to find donors among the police personnel.
DIG (West) Apur Bitin and Capital SP Tumme Amo gave assurance that the APP would hold “a much larger blood donation camp within the next 10 months,” and thanked the doctors and staffs of the Tomo Riba Institute of Health & Medical Sciences and the RK Mission Hospital for extending their support to the event.
Over 120 donors, including male and female personnel of the APP, and largely personnel from the IRBn, arrived from various camps near the capital complex for the blood donation camp.