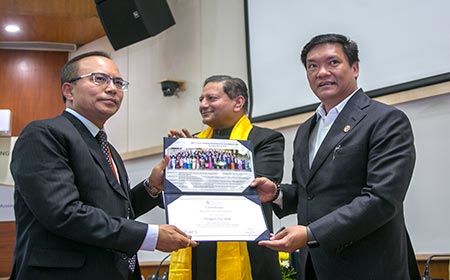 MUSSOORIE, Nov 29: Arunachal Chief Minister Pema Khandu on Friday said the country’s IAS officers can play an effective role in uniting the country.
“IAS officers are spread all over the country and hail from different regions, castes and creeds. They can play an effective role in binding the country together,” the CM said in his address at the valedictory function of the ‘mid-career training programme for IAS officers’ at the Lal Bahadur Shastri National Academy of Administration (LBSNAA) here in Uttarakhand.
Stating that the times are changing, Khandu said “the IAS officers must keep themselves updated with the latest trends and be ready to adapt to changes,” adding that mid-career training programmes are essential to help the officers in doing so.
“After what they have learnt in the institute, they must start implementing it on the ground, not superficially but understanding the genuine concerns of the people,” the CM said.
“Political leaders change every five years, but officials in the bureaucracy are for longer periods of time, and hence the role of IAS officers assumes greater importance in the development of the country,” he said.
The CM advised the officers to “keep the welfare of the poor in mind, keep themselves connected with ground realities, and rely on innovation for solutions.”
He also stressed on having a separate civil services cadre in his state, “as posting of non-permanent IAS/IPS officers at higher bureaucracy causes institutional memory loss that slows down the pace of development.”
Khandu gave away awards and certificates to the IAS officers who completed the training programme, and also felicitated LBSNAA Director Sanjeev Chopra.
Later, interacting with the officers, the CM spoke about his state, and said “although development may not have fully reached Arunachal, the patriotic spirit runs high in the veins of the people there.”
Khandu also answered several questions on issues related to Arunachal. (CMO)