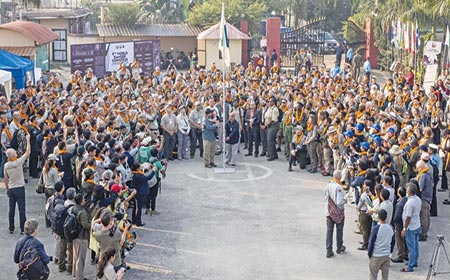 [ Kime Rambia ]
With a conglomeration of 550 Rangers from 70 countries across the globe, the 9th World Ranger Congress held from 12th Nov to 16th Nov 2019 at Chitwan National Park was the Mecca for anyone in the field of conservation.
The World Ranger Congress is a triennial event, and for the first time an Asian nation was chosen to host the event which turned out to be the largest ever congress till now. Ranger here refers to all the people who work in field of conservation of wildlife and biodiversity including the frontline staff and forest guards.
The Chitwan National Park in Nepal was deservingly chosen as host given the exemplary dedicated effort of their rangers which has resulted in “Zero-Poaching” of flagship species such as Tiger and Rhino for several years in a row.
The congress brings together rangers from across the world and allows them to collaborate better on the issues most affecting them and raise those issues in one voice to the rest of the world. It also provides a unique opportunity for sharing and exchanging management ideas of protected areas.
The World Ranger Congress also creates an opportunity to commemorate the fellow rangers who lost their lives in the line of duty to protect our planet’s magnificent biodiversity. More than a month to go this year but we have already lost 158 rangers, which remains just as a few dots in power point presentations and documentaries.
The stories of two participants which stood out among many plenary sessions were of a young girl called Ana from Nigeria and Airton from Brazil.
Ana lost her ranger parents to poachers in 2010, with no one to support her and two young brothers, teenaged Ana and her siblings almost ended up in a labour camp. But thanks to The International Ranger Federation (IRF)’s support, Ana completed her diploma in tourism and is now working while her brothers are pursuing their studies.
Airton is young man from Brazil, who was paralysed waist-down when he fell down from a tree while collecting seeds. His kidneys doesn’t work properly. In addition, Airton doesn’t know a word of English but in spite of all these difficulties he volunteers for conservation and travelled all the way to Chitwan in Nepal to be part of the congress.
There were many such inspiring stories which reminded me of our Pakke family: where many staff have sacrificed their life in line of duty, but their family members still continue working in Pakke with the same enthusiasm.
Rakesh Nabum, a member of STPF survived a leopard attack two years ago, losing a chunk of skin from his left elbow and enduring treatment for an entire month but he still patrols the reserve with the same sincerity.
Late Koro Tayem, a Forest Guard, whom we lovingly called Tayem Babu, was killed by a wild elephant while returning from his duty on Christmas day. His widow, Tileswari Tayem endures a lot, but continues to work as a contingency staff in Pakke.
Ganesh Lohar, an Elephant helper lost his wife year and a half ago to a wild elephant while reporting back to their camp.
Late Rajen Nag, a Beat Guard met with an accident while returning from Tippi Range Office, his brother in law still works in Pakke to support Family of Rajen Nag.
Late P.D Majhi, a Boatman, lost his life in cross fire with poachers decade ago, his son still works in Pakke.
There are many others in Pakke family who have survived elephant attacks, snake bites, boat accidents but happily carry out their duty protecting this amazing landscape of Pakke and its magnificent biodiversity. Considering these sacrifices and efforts, its painful when people often look at these wonderful animals only as a bush meat.
Here in Pakke we love working in field, climbing mountains, crossing rivers, sighting birds and animals, sometimes running for safety from wild animals, many a times chasing away elephants who enter nearby villages. The only occasional grumbling you will hear, is when their meager wages are delayed for 4-5 months, but who wouldn’t. (The author is a Range Forest Officer of Tippi Wildlife Range in Pakke Tiger Reserve).