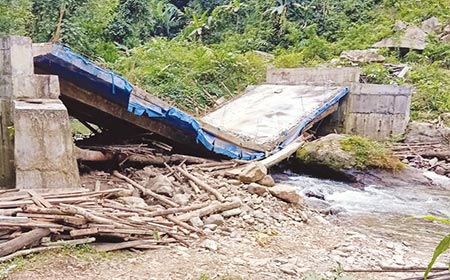 [ Karda Natam ]
DAPORIJO, Dec 3: The Siga to Dayam Road Land Affected Youth Forum (SDLAYF) has demanded a proper inquiry into the collapse of a RCC bridge over Duni Karo River in Upper Subansiri district.
The bridge connecting Siga (Lechin) with Dayam area collapsed barely six months from its completion, on 15 November-affecting people from more than 25 villages under Chetam and Nilling circles.
The bridge was constructed under RWD DPU-II Division Daporijo.
The Forum alleged that the implementing agency/department concerned compromised the quality of work and specifications in the construction, which led to collapse of the bridge.
Informing that a complaint in this regard has been lodged with the Upper Subansiri deputy commissioner, the Forum demanded appropriate action against all those responsible for collapse of the bridge.