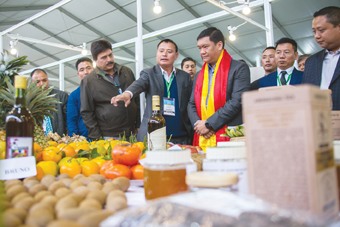 SHILLONG, Dec 6: Arunachal Chief Minister Pema Khandu attended the North East Food Show (NEFS) at Polo Ground here in Meghalaya on Friday.
The CM visited the Arunachal food stalls and interacted with the young entrepreneurs from different districts of Arunachal who had come to showcase their brands of organic teas, local wines, horticulture produces, and processed foods.
Speaking to media persons, Khandu said a report would be sought on the outcome of the exhibition from the department concerned, in order to give handholding support to the state’s entrepreneurs.
“The state government is taking steps to make way for investors of the state and outside the state, including foreign countries, to invest in Arunachal,” he said.
The CM informed that an investor summit will be organized in Arunachal “to encourage investors of the country and abroad to invest in Arunachal.”
He said special tax concessions and subsidies would be provided to investors.
Khandu also met other young entrepreneurs from the Northeast and briefed them on the investment prospects in Arunachal.
On establishing a mega food park in Arunachal, the CM said “the project will not only boost food industry but also help in getting thousands of youths to gain meaningful employment.”
He said his government has provided all basic facilities, such as road, water and electricity, for the food park to be developed.
Later, addressing a formal meeting, Khandu said his government is focusing on improving surface connectivity to encourage investment in the state.
“Arunachal is steadily preparing itself to become an investor-friendly state,” the CM said, adding that “works on an industrial corridor, railway lines along the state’s foothill areas, airports, and highways are being taken up speedily.”
The chief minister also said that, despite challenges, his government is according the highest priority to the development of agriculture and horticulture. He said various schemes, including devolution of funds to deputy commissioners, and huge loans, are being made available for startups.
Earlier, the NEFS began in the presence of Meghalaya CM Conrad Sangma, Tripura CM Biplab Deb, union MoS for Food Processing Industries Rameshwar Teli, Union MoS (Independent) for Sports Kiren Rijiju, and other dignitaries. (CM’s PR Cell)