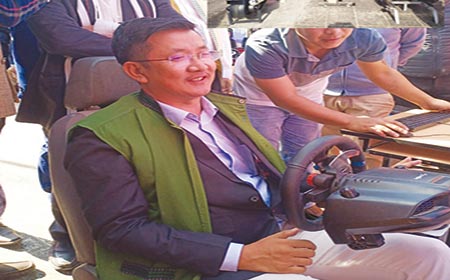 YUPIA, Dec 11: Transport Minister Nakap Nalo inaugurated the driving simulator device at District Transport office here in Papum Pare district on Wednesday.
The driving simulators for two wheelers and four wheelers have been introduced in the state first time. It will be used for training and test for novice drivers before issuing driving license.
Nalo, in his address, said that introduction of driving simulator heralded a new beginning for transport department and state as a whole in improving the role and responsibility of the department. He called upon all the District Transport Officers of various districts to make themselves well acquainted with driving simulator.
Regarding the steps taken by the government for improvement of the transport department, the minister informed that state Govt is taking up steps for improvement of transport services and infrastructures in days to come for greater welfare of people of Arunachal Pradesh.
Doimukh MLA Tana Hali Tara, while congratulating the department for their achievement, said that driving simulator will not only save the time, it will also help in conducting hassle free training and test to novice drivers. However, the MLA gave emphasis on awareness among the people so that it can be used smoothly.
While expressing his concern over increasing underage and drunken driving and road accident cases, the MLA asked the transport department to ensure that Arunachal Motor Vehicles Act is fully implemented. He further added that driving licence should be issued to the persons who are mentally and physically fit.
Transport Secretary Dani Salu called upon the DTOs to maintain impeccable image in the eyes of people and have clear concept about their duties and responsibilities.
Government officers, including transport director, DTOs and staff of district transport office attended the programme. DIPRO