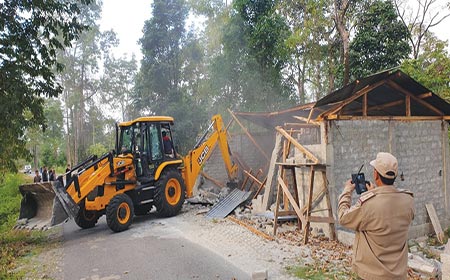 Staff Reporter
ITANAGAR, Dec 14: The Lohit district administration on Saturday morning dismantled more than 60 illegal structures that had been constructed in the reserved forest area of Tezu township.
Deputy Commissioner Prince Dhawan informed The Arunachal Times that the eviction drive, which was carried out with assistance from the forest department and the police, took nearly four hours to complete.
This daily had in early September reported the unabated encroachment by people who had built numerous structures and boundary walls, squeezing the strategic road between Tezu town and Shivaji Nagar. Reportedly, the rampant encroachment and rapid construction of the structures were being carried out for the purpose of claiming compensation in the wake of rumours that a railway alignment would pass through the area.
Dhawan informed that notices had been repeatedly served to the encroachers to dismantle their structures. However, instead of complying with the administration’s notice, the owners of the structures filed a petition in the court, which the court reportedly quashed.
The administration had carried out an eviction drive in September amid fierce resistance after this daily had highlighted the issue, but the drive had been stalled by the petition filed in the court.
In October 2017, the then Lohit DC, Karma Leki, had issued a notice directing the executive engineers of the PHE&WS department and the Tezu/Namsai power (electrical) department to ensure that the residents had proper land allotment and NOCs from the district administration prior to providing water supply and electricity connection in those areas.
The open encroachment stalled the setting up of the proposed AYUSH medical college there. It is understood that during the 2011 socioeconomic census, the settlers in the area – mostly non-APSTs – misled the enumerators by addressing the township extension area as Shivaji Nagar, whereas the original Shivaji Nagar is in the 43 Mile area.