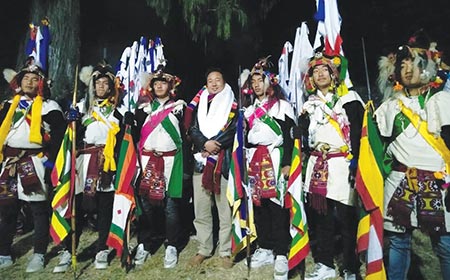 RUPA, Dec 17: Khiksaba festival of the Sherdukpen tribe was celebrated here in West Kameng district from 12-16 December with pomp and gaiety.
Besides local MLA Dorjee Wangdi Kharma, ex-minister Dorjee Khandu Thongdok, former Dirang ZPM Dorjee Tsering Merakpa and people from various parts of the district participated in the festivities.
The Sherdukpen tribe derives its name from Sher (Shergaon) and Tukpen (old name for Rupa) villages. The tribe also celebrates Buddhist festivals. Khiksaba, however, is an indigenous non-Buddhist festival of the Sherdukpens, dedicated to appease the forest deities and other mountain spirits.
The community also celebrates the harvest festival, Rep Lapchang. Such festivals are presided over by the jiji or local shaman, instead of Buddhist lamas.