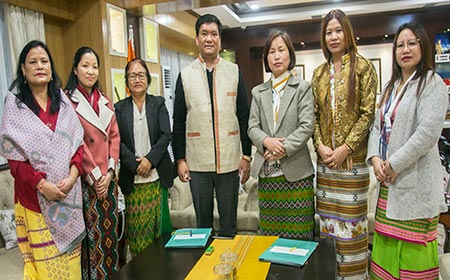 ITANAGAR, Dec 18: The Chairperson of the Arunachal Pradesh State Commission for Women (APSCW) Radhilu Chai Techi and her team met the Chief Minister Pema Khandu and apprised him about the condition of commission office.
The Commission informed the Chief Minister about the prevailing precarious condition of the Commission’s office here
at C-Sector following the widening of the highway that runs just besides the building.
The team informed that due to earth cutting for road widening, half of the building including several rooms and washrooms are at the verge of collapse and urged the Chief Minister for an alternate and permanent arrangement.
“As the office building has been declared unfit for use, the Commission office is not functioning at the moment. With so many cases up for hearing, we are in a fix,” said Chairperson Chai. When suggested that the Commission may be allotted one of the buildings owned by the state PWD, which has fallen vacant after shifting of the PWD offices to another town or respective zones, Khandu assured to take up the matter urgently with the said department. He also assured that whatever repair is required for the said building, it would be borne by the state government.
Informing that the state government proposes to build a multi-office building that would house all the Commissions of the state, Khandu said that till it comes up, APSCW will be housed in a proper building. “We cannot let the Commission office go defunct for want of an office building even for a day,” he asserted.
The members of the Commission reiterated their concerns and made suggestions concerning women of the state that include establishment of women police stations in all districts, drug de addiction centers, short stay homes and working women hostels, CCTV coverage at all vulnerable places, compulsory registration with valid documents of visitors in all hotels, surveillance, etc.