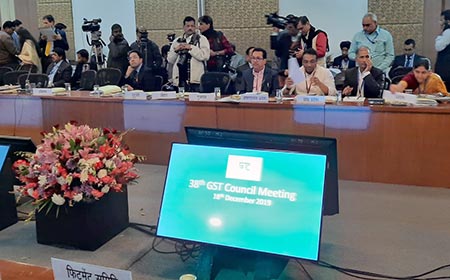 NEW DELHI, Dec 18: Deputy Chief Minister has highlighted the problems faced by the state government for proper implementation of Goods & Services Tax (GST) due to poor internet connectivity and power issues. He said that the connectivity in the state needs to be improved as the state is dependent on robust IT system. He also said that due to lack of robust IT infrastructure and difficult terrain the state is facing difficulty in implementation of GST properly as it mandates that all the DDOs are required to register and subsequently file returns electronically.
In the absence of SWAN in the state, the other telecom service providers may be requested to provide reliable connectivity throughout the State, he said.
Mein was speaking at the 38th GST Council Meeting which was attended by the Finance Ministers of all the States and Union Territories and chaired by Union Finance Minister Nirmala Sitharaman here on Wednesday.
He also submitted a proposal before the GST council to do away with the existing two rates of GST on lottery citing that the dual rates have adversely affected revenue and market access for smaller North Eastern states. He said that the Arunachal Pradesh advocates for a single rate of tax on lottery as GST has converted India into a single unified market.
While accepting his proposal, the GST council passed a motion for uniform rate of 28% for lottery through out the country which would come into effect from 01/03/2020.
He also highlighted the benefits of implementing in the state and said that the introduction of Goods & Services Tax in Arunachal Pradesh has been a positive revenue event for the state. There is a growth in revenue collection in the state since implementation of GST, he added.