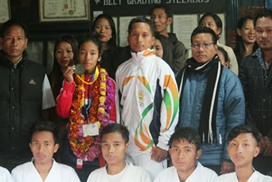 KHONSA, Dec 19: Kamcha Kamhua, the winner of the bronze medal in the U-19 karate competition in the 65th National School Games, was felicitated by the All Tirap Karate-Do Association (ATKA) and the Tirap Olympic Association (TOA) here on Thursday.
Daughter of Wangrum Kamhua, of Moktowa village, Kamcha is a Class 10 student of the government higher secondary school here.
Felicitating the achiever, ATKA secretary-general Wangcha Lowang, who is also Kamcha’s karate master, stressed the importance of learning martial arts, especially by girl children, for self-defence.
“In countries like Japan, China, Korea and America, martial arts are taught in the classes as one of the subjects,” Lowang said. He also informed about the job reservation for meritorious sportspersons.
Kamcha had earlier won the gold medal in the State-Level U-19 Games held at Daporijo, and the silver medal in the district-level Khelo India tournament.
TOA chief advisor Lorang Loham congratulated Khamcha and advised her to study hard, apart from pursuing her sports activity.
The medallist on her part said she would not have been able to join the karate club without the immense support of her local guardians. She also acknowledged the role of her karate master, Lowang.
Among others, the felicitation programme was attended by Moktowa chief Tewang Lowang, public figures of Dadam, family members, and well-wishers. (DIPRO)