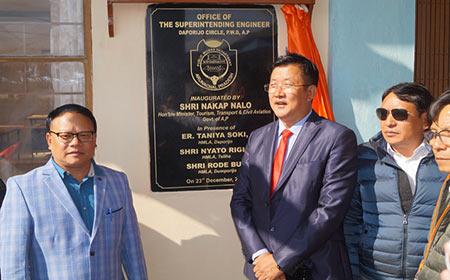 DAPORIJO, Dec 23: Tourism Minister Nakap Nalo inaugurated the office of the Daporijo circle PWD SE here in Upper Subansiri district on Monday.
The minister congratulated the PWD on the occasion, but said although Upper Subansiri is one of the oldest districts in the state, “it is counted among the very backward districts due to lack of infrastructure.
“Hence it is the role and responsibility of all the elected representatives and the government officials to rebuild the district,” he said.
Nalo also raised the issue of land encroachment in Daporijo, and instructed the officials present to avoid such practice and bring to the notice of the administration cases of illegal encroachment.
“Daporijo is the only asset remaining, and all efforts will be made for its protection,” he said, and requested those present to “not give land eviction drive a political issue whenever it will be carried out.”
The MLAs of Daporijo, Taliha and Dumporijo were also present at the function.
The minister later took part in a meeting to discuss matters related to the forthcoming 2nd Subansiri River Festival.
During the meeting, which was also attended by all the MLAs and government officials, DTO Dikchu Raji highlighted the “nature and mode for organising such event in the district.”
Deputy Commissioner Kanto Danggen said “the focus (of the celebration) should be on originality or unique style that belongs to Upper Subansiri district.” (DIPRO)