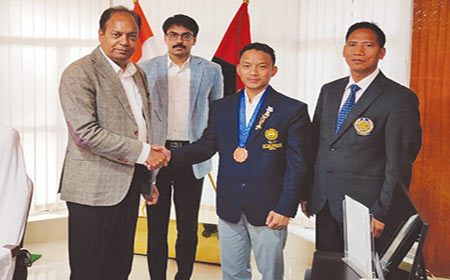 ITANAGAR, Dec 24: South Asian Games medal winner, SI Gangphung Gangsa, called on DGP RP Upadhyaya at his office here on Tuesday.
The DGP congratulated Gangsa for bringing laurels to the state and the police department by winning a medal in the prestigious event.
Gangsa, a sub-inspector at the PTC, Banderdewa, won the bronze medal in his weight category in Taekwondo in the 13th South Asian Games which had been held in Nepal earlier this month.
Upadhyaya encouraged Gangsa to try hard and bring more laurels to the state and the country. The DGP said he would help Gangsa in every possible way in the future.
SP Harsha Vardhan, who was also present, commended Gangsa on his achievement, and assured him of all possible assistance to participate in the world championship to be held in Denmark at a later date.
Gangsa was accompanied by Inspector Bulang Marik.