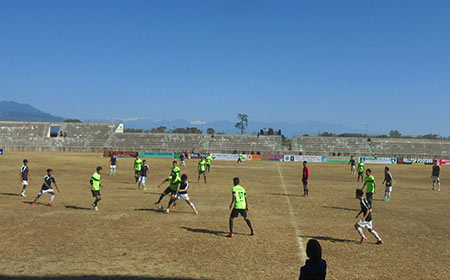 [ Prafulla Kaman ]
PASIGHAT, Dec 31: Arunachal Pradesh Police (APP) became the second team after East Siang to qualify for the semifinals of the 18th Tadar Tang SLFT being played here in East Siang district.
The defending champion (APP) played out a goalless draw against Capital Complex FA on Tuesday. They advanced to the last four on better goal differences.
In another match played in the day, Lower Dibang Valley (LDV) trounced West Kameng 4-0.
The game was fairly flat until the end of the first half, with the score remaining 0-0 in that half.
Kaying Tayeng broke the deadlock, scoring in the 52nd minute, before Andhoko Meto scored a hat-trick of goals to seal the victory.
The match played between Kurung Kumey and East Kameng ended in a 1-1 draw.
Karling Paffa (East Kameng) and Tadak Kojum scored the goals for their respective teams.
Lower Subansiri ended their tournament campaign with a hard-fought 4-3 win against Dibang Valley.
Today’s matches:
LDV vs Kra Daadi, West Siang vs West Kameng, East Kameng vs Leparada, and K/Kumey vs Changlang.