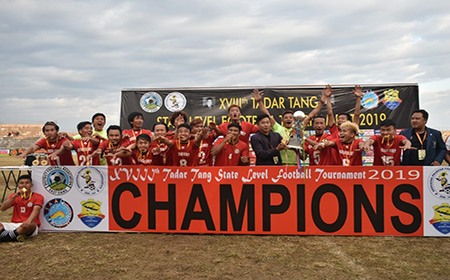 PASIGHAT, Jan 6: Kurung Kumey lifted the Tadar Tang State Level Football Trophy for the fourth time after they defeated East Siang 4-3 via penalty shoot out in the final match of the tournament’s 18th edition played here in East Siang on Monday.
It was a game of missed opportunities as both the teams squandered several scoring chances throughout the course of play. The score remained 0-0 at the end of the regulation and extra time.
Tame Agung was adjudged the most valuable player of the tournament for his superb performance throughout the tournament. Tajong Nonang, of East Siang, was declared the best goalkeeper, while the title of the highest scorer went to Andhoko Meto, of Lower Dibang Valley.