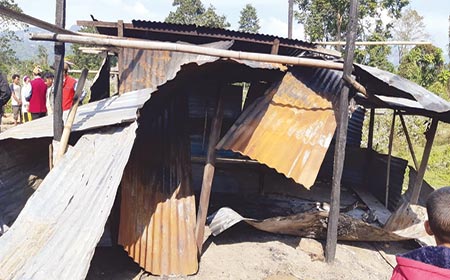 SANGO, Jan 7: Papum Pare DC Pige Ligu, along with SP Jimmy Chiram, Balijan ADC Tasso Gambo, Prof Tana Showren of RGU, Tarasso CO Rome Mete, DDMO Tsering Youngjom, ex-ZPM Nabam Eka, and GBs of Tarasso on Tuesday visited Sango village in Papum Pare district, where the house of one Tana Taji was vandalized by Assam forest officials on 2 January.
As per Taji’s statement, all his household belongings
were destroyed in the incident, “and cash amounting to Rs 30,000 was taken away by the Assam forest officials.”
An FIR was lodged at the Tarasso police station (PS) on 6 January. The SP directed the Tarasso PS OC to write to the DFO of Biswanath Chariali, Assam, regarding the incident. (DIPRO)