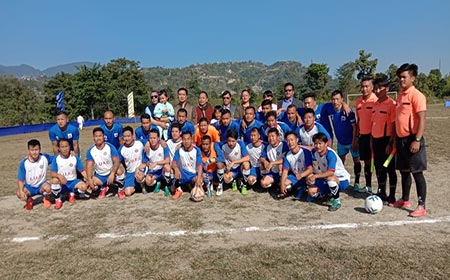 CHIMPU, Jan 12: Defending champion Arunachal Pradesh Police (APP) defeated Itanagar United Football Club (IUFC) in the opening match of the 7th State Level Veteran Cup Football Tournament, which got underway at the battalion ground near here on Sunday.
Dojum Nomak of the APP was adjudged the ‘hero of the match’.
Earlier, addressing the players, organising chairman Toko Tatung spoke about how the tournament has encouraged senior players from various districts to give back to the game.
Tali MLA Jikke Tako, who was the chief guest, exhorted the players to be “examples for the younger generation by upholding the spirit of sportsmanship, and popularize the game of football as ambassadors.”
MLAs Phurpa Tsering, Kharma Wangdi Dorjee and Dongru Siongju, and Papum Pare SP Jimmy Chiram also encouraged the participating teams.
Earlier in the day, seven pigeons were released by the dignitaries to symbolize the 7th edition of the tournament, in which 10 teams are participating.