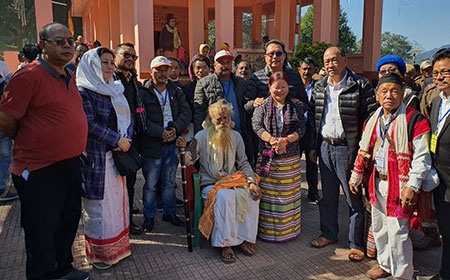 WAKRO, Jan 14: Enthused by the large number of pilgrims’ footfalls at the Parshuram Kund here, Deputy Chief Minister Chowna Mein on Tuesday announced to make the Parshuram Kund Mela a calendar event to boost spiritual tourism.
The fair had recorded over 12,000 pilgrims till late Tuesday evening.
Mein was here on a survey with officers of Lohit and Namsai districts to inspect the tourist lodge, the pilgrims’ guest house, the transit hospital, the ‘mela office’, the police outpost, and other facilities at the festival site in Lohit district. He also inspected the newly laid approach road to the lord Parshuram temple.
The DCM inaugurated a free health camp organised by the 186th battalion of the CRPF, besides food stalls and the LED screen at the festival site.
He said he has directed the Lohit and Namsai administrations to “prepare a blueprint to make the religious event one of the biggest ever and establish it as an annual calendar event at the national and international level as thousands of pilgrims visit this place in winter every year, especially on Makar Sankranti day, for a holy dip in the sacred kund.”
He said the festival would also provide livelihood opportunities to the locals and help them generate income and promote rural tourism.
The DCM directed the district administration to “create a scope for creating facilities for trekking from Tezu to Glow Lake, hiking, river rafting and angling on the river Lohit.”
He also interacted with shopkeepers, pilgrims and priests at the festival site and enquired about their experiences in the festival.
Earlier, Mein, accompanied by MLAs Zingnu Namchoom, Jummum Ete Deori and Dasanglu Pul and former Chongkham MLA Chow Tewa Mein, offered prayers at the lord Parshuram temple.
Among others, Namsai DC Bijoy Talukdar and Lohit SP DW Thongon accompanied the DCM.
Nestled in the lower reaches of the Lohit river, Parshuram Kund is regarded as a holy place by Hindu devotees. Every year, in January, devotees from other parts of the country and abroad throng the kund to take a holy dip in the river. (DCM’s PR Cell)