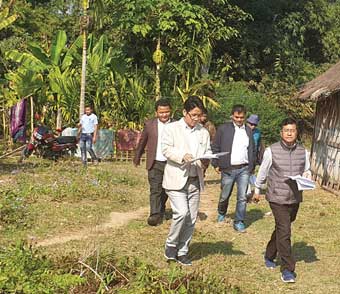 NAMSAI, Jan 16: A fact-finding committee (FFC) of the Arunachal Indigenous Tribes Forum (AITF) visited various villages in Namsai district, in the wake of the violence that had taken place between two communities residing in the district in October last year.
The team, comprising Marcony Potom as its chairman, Tapi Tai as vice-chairman, Heri Maring as member secretary, Suraj Tayeng as member, and others, visited several villages, including Mabira, Morapat, Mazgaon, Jaipur, Samughuri and New Jengthu.
Interacting with the village elders, heads, gaon burahs, former PRI leaders, and community leaders, the FFC asked them to “maintain peace, tranquillity, communal harmony and brotherhood.”
Potom informed reporters that the AITF constituted the FFC to negotiate peace among the community leaders.
“We are here to study the facts which led to the violence in the district towards the end of 2019 and created a lot of confusion among the citizens of the state,” he said.
“Every problem has a solution. The main motto was to meet the villagers to inform them to maintain communal harmony, and in any case they should maintain peace and brotherhood,” Potom said.
He said the district administration is also doing its duty along with all community leaders, and appealed to all to maintain cordial relations, “so that there is no repeat of such violence in future and peace and tranquillity prevails.”