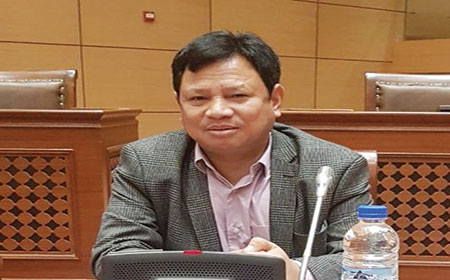 Staff Reporter
ITANAGAR, Jan 17: Pakke-Kessang MLA and senior party ideologue Biyuram Wahge has been elected as the new state BJP president. He succeeds Tapir Gao.
Wahge’s name was announced by the party’s national general secretary Anil Jain, who is also the party’s election in-charge for Arunachal. Jain along with Lok Sabha member Vinod Sarkar had been sent as the observers of the party’s state election.
Born in 1965 to Tali Wahge, in Seba village in East Kameng district, Biyuram Wahge did his schooling in Seppa and Bomdila, and later settled down in Seijosa, in Pakke-Kessang district. He is the younger brother of PWD Western Zone CE Katung Wahge.
Biyuram Wahge has served the state BJP in distinct capacities since 2000. He was the state BJYM general secretary from 2000-03, the state BJYM vice-president from 2003-05, and the state BJYM president from 2005-08. He went on to become the state BJP’s treasurer in 2008, and the party’s state general secretary in 2014. Wahge got elected as MLA from Pakke-Kessang constituency in the 2017 bye-election, after then incumbent MLA Kameng Dolo’s seat was vacated by a high court ruling.
Speaking to the media after his election, Wahge said he has been serving the BJP in Arunachal from an early stage.
“Initially, no one wanted to take any post in the BJP. Today we are fighting for mandal posts. That’s how we saw our growth. We were only 11 people, including late Kangir Jamoh, Kiren Rijiju, and Tapir Gao,” he said, and expressed happiness over the party’s tremendous growth.
“I thank my party colleagues for keeping faith in me. To strengthen the party is my top priority,” he said.
On being asked whether there were many frontrunners for the party president’s post, Waghe responded: “It implies that the BJP is going strong. It doesn’t, however, mean that there is division in the party.”
“Whoever works for the party should be given a fair chance, without distinguishing between new and old members,” he added.