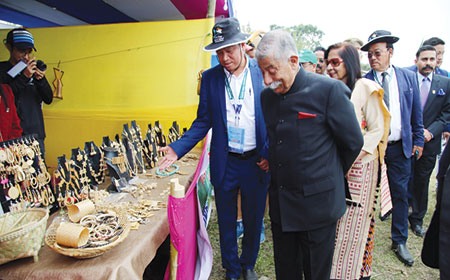 SEIJOSA, Jan 18: Governor BD Mishra inaugurated the Pakke Paga Hornbill Festival here in Pakke-Kessang district on Saturday, and lauded the objective of the festival, which aims to “promote and preserve the environment and nature.”
The governor urged the people to conserve the flora and fauna of the state, and advised them to “properly utilize the boon of nature and pass them on to the next generation in better condition.”
He commended the elders and leaders of the Nyishi community for their initiative to do away with the use of hornbill beaks on their headgear and instead using fibreglass beaks.
“This mindset, approach and action is doing yeomen service in preserving our state bird hornbill,” he said.
Mishra said government officials must meet the people “and also go to the field” to ensure that developmental projects are implemented with transparency, accountability and honesty.
Expressing concern over the problems faced by the people of Arunachal’s villages near the boundaries with Assam, the governor informed about his initiative to resolve the contentious issues between Assam and Arunachal.
Local MLA Biyuram Wahge, former DCM Kameng Dolo, former MLA Techi Hemu, and Everester Anshu Jamsenpa also participated in the inaugural function. (Raj Bhavan)