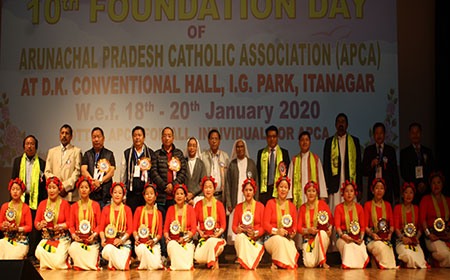 ITANAGAR, Jan 19: Itanagar MLA Techi Kaso on Sunday praised the role of the Church in promoting freedom of women.
“In our society, women had faced difficulties with issues like polygamy. Earlier, they remained mostly busy in household works. The Church has played an important role in espousing freedom for women,” he said during an event organised by the Arunachal Pradesh Catholic Association (APCA) at the DK Convention Centre here.
“A true Christian is a selfless, unbiased, non-judgmental and sociable person,” he said, adding that a true Christian “will treat everyone as equal and will not discriminate based on religion, tribe, social status, etc.”
Bordumsa MLA Samlung Mossang, former MP Takam Sanjoy, and others also spoke.
People of different tribes presented a cultural programme on the occasion.
Earlier, the day started with the celebration of Eucharist, led by APCA founder member Fr CC Jose and a host of other Catholic priests.