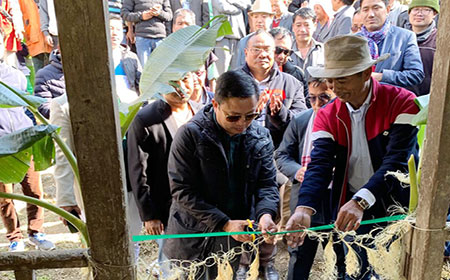 KAYI DUMDE, Jan 19: Liromoba MLA Nyamar Karbak visited remote Kayi Dumde village in Liromoba circle of West Siang district on Sunday.
The minister inaugurated a ‘volleyball gallery’ in the village. He also fully sponsored a health camp organised here by the District Health Society, benefitting villagers from Kayi Dumde, Kayi Botak and Ligo.
DMO Dr Moli Riba, Dr Jarkar Kayi and other health officials were part of the camp, during which free eye and ENT check-ups were provided to the villagers.
Eight persons with cataract were detected during the camp, and the MLA said he would bear the cost of their treatment.
Later, addressing a public meeting, Karbak assured to look into their demand for a new community hall and a football ground.
The MLA also visited Ligo, where, too, the villagers demanded a community hall and a football field.
Reiterating his “commitment and stand for inclusive development of every village under Liromoba,” Karbak assured to address the demands made by the villagers of Ligo and Kayi Dumde “with priority.”