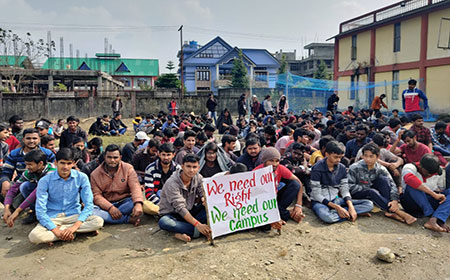 Staff Reporter
YUPIA, Jan 21: The trouble is brewing up in the temporary campus of the National Institute of Technology (NIT) here as angry students on Tuesday staged protest walk from college building to the boy’s hostel expressing resentment over failure of NIT authorities to shift to the permanent campus at Jote under Papum Pare district and also alleging denial of laboratory and library facilities.
Ever since the establishment of NIT Arunachal Pradesh in 2010, the institute is being functional from a temporary campus situated here. The construction work at permanent campus has reportedly stopped after ministry of human resource and development (MHRD) stopped funding.
The non availability of campus life along with no progress at permanent campus at Jote has aggravated the student’s plight forcing them to stage the strike.
“The only possible way to settle these issues is to shift to the permanent campus at Jote along with full facilities of accommodation, library and laboratories for both students and faculty members. Every year we are promised that NIT will be shifted to permanent campus but it never materializes,” the protesting students alleged.
The students further warned that they will sit-on strike until all their demands are taken into account and proper action is initiated to meet their demands.
The NIT’s foundation stone at Jote was laid way back in February 2013 by the then union HRD minister MM Pallam Raju. The institute is operating out of a temporary campus, the Industrial Training Institute (ITI) building, in Yupia since its establishment in July 2010.
In October 2017, efforts were made to shift a few batches of students to Jote. But the move was strongly resisted by the students, who refused to obey the order of the institute’s authority citing lack of facilities. It resulted in clashes between the students and the authority, and the move failed.
When contacted by this daily over phone, NIT Director in-charge Dr. Rajen Pudur said that the institute is aware of the students’ concerns and is doing all it can do to address them.
“The students must understand that the institute’s administration also wants that it is shifted to a permanent campus at the earliest but since funds from the Centre has not been released, construction work at the permanent site at Jote has been abruptly paused by the work executing agency. The students’ demands are genuine but we are helpless in the present scenario,” he said.
Dr. Pudur, however, informed that the present status of the infrastructure development at the institute’s permanent site at Jote has remained the same as it was a couple of years back due to lack of funds.
“The institute has, therefore, decided to hold laboratory classes at Jote during weekends. Now the students attend laboratory classes at Jote while, theory classes are being held here at Yupia,” he informed.
Regarding the students’ other concern over low placement of the institute’s students on grounds of non-availability of a permanent campus, Dr. Pudur stated that their concerns are pointless as the institute has recorded almost 60 percent placements in reputed organizations in the past few years.
In December 2018, the institute’s Board of Governor Chairman Prof Anil D Sahasrabudhe had announced that undergraduate (UG) classes would be held at its permanent campus from July 2019 onwards. It was expected to start the process to shift to the permanent campus but announcement never materialized. Chief Minister also visited NIT Jote campus twice in the last three years and had assured to take up matter with MHRD.