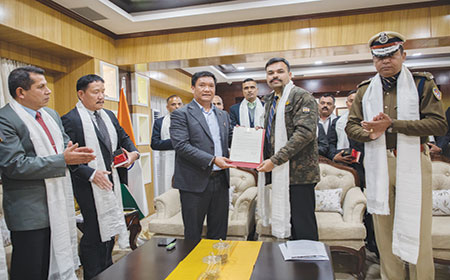 ITANAGAR, Jan 22: Chief Minister Pema Khandu on Wednesday lauded the members of the Special Investigating Team (SIT) of Arunachal Pradesh Police for bringing to task Tagyung Yangfo, who was wanted in connection for the murder of DySP Bomto Kamdak.
During the call on by the SIT team led by DGP RP Upadhyaya and SP Dr Navdeep Singh Brar, the chief minister said “the selfless dedication and tireless effort by the SIT team has touched our hearts and sky-rocketed the image of the state police force bringing in new vigour.”
“We honour your service for inspiring greatness both within and outside the force,” said the chief minister.
He also appreciated the well coordinated effort shown by the ground action team and the support team that worked behind the scene to bring to an end the three-year long search for the accused who was also wanted in several other police cases.
The chief minister also acknowledged the SIT team for its earlier achievements in apprehending several underground extortionists operating in the state. He said “for governance to be effective, the police force has to be strong and efficient.” (CMO)