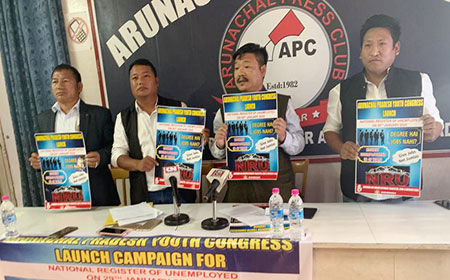 Staff Reporter
ITANAGAR, Jan 29: Joining its national youth wing’s nationwide campaign to prepare a national register of unemployment (NRU), the Arunachal Pradesh Youth Congress (APYC) on Wednesday launched the campaign to prepare the NRU in Arunachal Pradesh.
Addressing a press conference at the Arunachal Press Club, APYC general secretary Taba Sarbang said, “The objective of launching the campaign is to highlight the alarming rate of increasing unemployment across India and Arunachal Pradesh under the BJP government.”
“Instead of creating jobs, the BJP government has brought the CAA (Citizenship Amendment Act), NCR (National register of citizens) and NPR (national population register) to destroy the peace, tranquillity and harmony of the country,” Sarbang said.
The Congress is preparing data base of unemployment through phone calls on the number 8151994411. The APYC informed that missed call of any unemployed youth will be registered in the record.
The Congress youth wing appealed to the people of Arunachal Pradesh, especially unemployed youths to give missed calls in the given number.
“The BJP Government at the Centre and the state do not have proper plans for creation of jobs, and therefore, the Congress’ youth wing is launching the campaign to focus on pressing issues,” APYC media in-charge Vijay Nalo said.
According to the National Sample Survey Office, India recorded highest number of unemployment in 45 years, and as many as 36 youth committed suicide every day because of unemployment and other problem, Nalo informed.
He went on to claim that employment rate in Jammu and Kashmir is far better than the national rate, with 8.48 percent recorded unemployment growth rate. He added that 3.5 lakhs people are unemployed in the automobile sector.
“It is a matter of concern that tribal states like ours with low population have high unemployment rate,” Nalo added. He further informed that the campaign intends to find out the exact figure of unemployed youths across India and Arunachal.