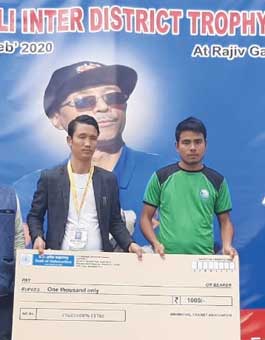 RONO HILLS, Jan 30: Lower Subansiri beat Upper Subansiri by 6 wickets in a match played at Ground 1 here on Thursday, the seventh day of the Tado Kholi Inter-District Trophy cricket tournament.
Joram Richo of Lower Subansiri was adjudged the man of the match for scoring 38 runs from 33 balls with 6 boundaries and 1 six.
After winning the toss, Upper Subansiri opted to bat first, and scored only 107 runs for 10 wickets off 35.2 overs.
Lower Subansiri reached the winning target of 108 runs in 18 overs, losing 4 wickets.
At Ground 2, West Siang beat East Kameng by 4 wickets. No batsman of East Kameng was able to score comfortable runs and fell cheaply at the hands of West Siang’s bowlers.
Electing to bat first after winning the toss, East Kameng were all out for 95 runs in 28.2 overs.
Ritto Nasso of West Siang was adjudged the man of the match for taking 4 wickets for 23 runs (one maiden) in his 6-over spell.
Friday’s matches: Lower Siang vs Kurung Kumey; Papum Pare vs Upper Subansiri.