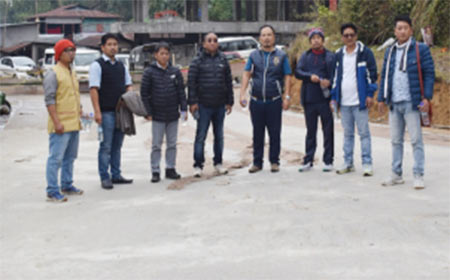 ITANAGAR, Feb 2: Itanagar MLA Techi Kaso on Sunday inspected the quality of the 2.50 km-long cement concrete (CC) road from Lobi Panchali to Lobi, via Khola Camp, constructed under the Itanagar smart city project.
While he expressed satisfaction with the quality of the work, the MLA directed the department concerned to open the road to traffic “only after proper curing is done.”
He also directed ‘Smart City Itanagar’ to “take up the laying of CC pavement from the Itanagar Gompa to Donyi Polo Vidya Bhawan” – a stretch of over 4.50 kms – “on priority.”
‘Smart City Itanagar’ Joint CEO (Tech) and IMC EE Tadar Tarang informed the MLA that a stretch of over 27 kms is being taken up under the smart city project, and gave assurance that the work would be completed within the stipulated timeframe.
Kaso was accompanied by AE Yumlam Tach, engineer Nabam Sony, and the contractor concerned.