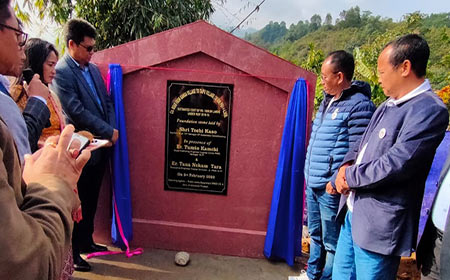 ITANAGAR, Feb 3: Local MLA Techi Kaso on Monday laid the foundation stone for the first phase of work on the Ganga-Teipu road, measuring 35 kilometres, here in the presence of officers from the PWD and the environment & forests department, former panchayat leaders, local leaders, GBs, and others.
Addressing the public, Kaso said the total length of the road is 35 kms and the first phase would cover 4.5 kms under the RIDF scheme, with a project cost of Rs 1000 lakhs.
The PWD’s Capital Division A is the executing agency.
Kaso expressed hope that the road would be constructed following the laid down norms, and that quality would not be compromised with. He also urged the people to preserve and protect wildlife and forests.
The MLA informed that the abandoned road from Chemi to Batt “has been approved” and a fund of around Rs 9.5 crore has been earmarked for it. He asked the PWD to issue an NOC, so that the road is taken up by the RWD.
Kaso appealed to the people of the capital complex not to create hurdles in the execution of developmental projects.
“Major road projects will be taken up in the coming days within the capital region. Chief Minister Pema Khandu and Deputy Chief Minister Chowna Mein have assured to provide support for improving the road connectivity in the capital city,” he said.
PWD Capital Circle SE T Kamsi requested the contractor to implement the project as per the guidelines. He also directed the PWD to strictly monitor the work’s progress.
DCF (WL) Umesh Kumar spoke about wildlife conservation and protection of wildlife and the environment. PWD Capital Division A Executive Engineer Tana Nikam Tara, local leaders Taro Tagia, Techi Nicha, Techi Atum and Techi Nera, GBs, and former panchayat leaders were among those present on the occasion.