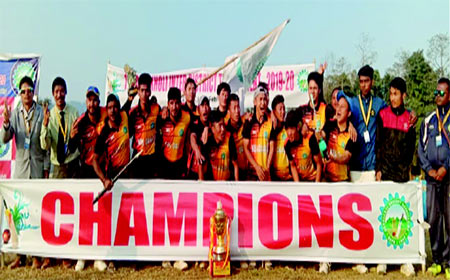 RONO HILLS, Feb 4: Kra Daadi won the Tada Kholi Inter-District Trophy by 35 runs after bowling out Itanagar for 98 runs in the final match held here on the Rajiv Gandhi University grounds on Tuesday.
Earlier, Itanagar won the toss and chose to bowl first. The Kra Daadi batsmen scored 133 runs for 10 wickets off 40.2 overs, and posted the target of 134 runs to win.
Nabam Josh was the highest wicket-taker for Itanagar with four wickets for 25 runs off 10 overs and 2 maidens. Nabam Dol and Suhel Hussain took 2 wickets each for Itanagar.
Nabam Dol also won the man of the series trophy.
Man of the match, Sandeep Kumar Siwach, was the highest wicket-taker for Kra Daadi with 3 wickets.
Dindo Taching, Sosar David and Kuldip Singh Sharma took 2 wickets each for Kra Daadi.
Chasing the decent target of 134 runs to win, Itanagar were all out for 98 runs in 32.4 overs. Suhel Aktar Ansari was the top scorer for Itanagar with 44 runs off 58 balls.