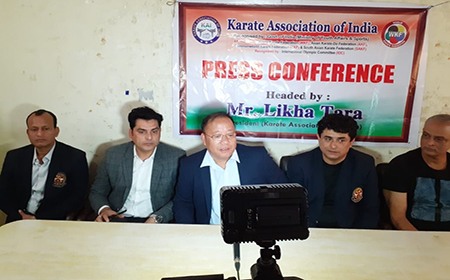 Staff Reporter
GUWAHATI, Feb 5: The Karate Association of India (KAI) in its executive body meeting under the chairmanship of president Likha Tara here in Assam on Wednesday unanimously suspended its vice president Bharat Sharma for numerous allegations, including fund misappropriation.
Later, addressing the press persons in the press club here, Tara said that the decision was unanimous as the Olympic Association of India had de-affiliated KAI in December last “for his misdeeds while charges against him included violation of established rules for conducting referee examination by undermining referee commission authority.”
Reportedly, there were complaints from treasurer Premjeet Sen from West Bengal about misusing KAI funds, though signed by authorized signatories in advance on good faith.
Senior vice president Hari Prasad Pattanayak said that Sharma had developed good relations with bankers by serving as general secretary for 12 years “which helped him to manipulate things according to his whims.”
Tara, who was elected to the post about a year ago, said that he had verbally cautioned Sharma on several occasions about such allegations after receiving complaints from various quarters. Thus, he said that he had conducted thorough study for three months which helped in taking this bold decision.
“The move is not personal but in the greater interest of India and karate as KAI is affiliated to the World Karate Federation,” he said.
The KAI president also informed that a three-member committee was constituted to probe all the charges and allegations and submit the report within a month.
“Sharma will be terminated if he is proved guilty,” he added.
Besides Sen and Pattanayak, others present during the press conference were secretary Ambedkar Gupta (J-K), joint secretaries C Dusavunga and Rajesh Agarwal and Assam unit secretary Uday Sah.