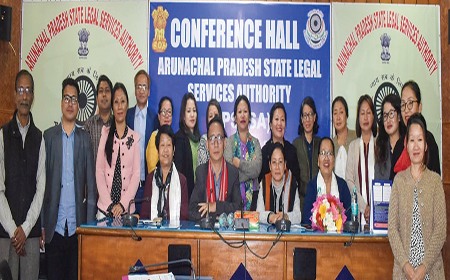 ITANAGAR, Feb 7: Members of the Arunachal Pradesh State Legal Services Authority (APSLSA) and the Arunachal Pradesh Women’s Welfare Society (APWWS) participated in a coordination meeting here on Thursday.
During the meeting, the APWWS team urged the APSLSA to create extensive awareness on the Narcotic Drug & Psychotropic Substances Act in schools, colleges and universities.
The team also urged the new APSLSA Member Secretary, Jaweplu Chai, to “continue the programme of marriage registration during statehood,” as had been done by her predecessor, Budi Habung, and to initiate steps to sensitize the local complaint committee and the internal complaint committee to the Sexual Harassment at Workplace Act.
The APWWS members also urged the APSLSA to create awareness on central and state government schemes pertaining to the welfare of women and children, besides imparting paralegal volunteers training to members of the APWWS.
APWWS secretary-general Kani Nada Maling said “positive changes have taken place in the field of legal profession after the establishment of the APSLSA, as people have become more aware about their rights, and justice has been made accessible to all.”
Chai and APSLSA OSD Dani Belo also spoke.
Earlier, the APWWS members felicitated Jaweplu Chai.