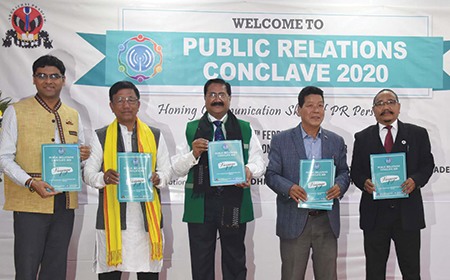 ITANAGAR, Feb 7: The two-day Public Relations (PR) Conclave-2020, being organised by the state’s information & public relations (IPR) department in collaboration with Rajiv Gandhi University (RGU), got underway here on Friday.
The maiden conclave on public relations, which is aimed at honing the communication skills of PR officers of the state, was inaugurated by Agriculture Minister Tage Taki, in the presence of RGU Vice-Chancellor Prof Saket Kushwaha, IPR Secretary Himanshu Gupta, guests from other Northeast states, officials from the IPR department, and students from RGU and St Claret College, Ziro.
Highlighting the importance of communication, Taki in his address said, “Communication is very important for the society as it binds and keeps it together,” adding that “without communication the gap within the family widens.”
Describing the IPR department as the eyes, ears and mouth of the government, he advised the department to “double its effort to disseminate information on all government programmes.”
“The task of the department will be completed only when feedback and queries are received from the public about the programmes and schemes of the government,” Taki said, adding that the success of any welfare programme “is directly proportional to the quantum of public awareness about the scheme.”
The minister exhorted the department’s officers to be equipped with information about the government’s policies and programmes and create maximum awareness.
Prof Kushwaha in his address described the task of the IPR department in disseminating news as “a very difficult one, as the officers have to maintain a balance of the news from the source to the recipient.”
“Whatever you do today, the repercussions will continue forever,” he said, and stressed the need to “recruit people with the right perspective to work for the government.”
IIMC Regional Director LR Sailo quoted Bill Gates – “If I was down to my last dollar, I’d spend it on public relations” – and emphasized the importance of public relations and the need to improve and enhance the capacity of PR officers.
Later in the day, officers of the IPR departments of Arunachal, Nagaland and Assam discussed the publicity models adopted by them and the structure of their organisations.
Col Talum Dubi gave a talk on ‘Personality development for PR practitioners’.