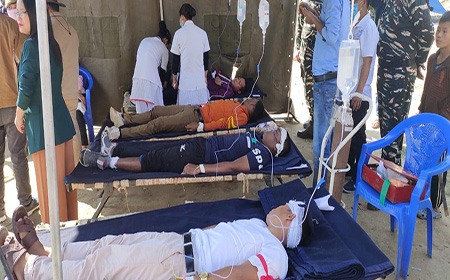 Staff Reporter
ITANAGAR, Feb 11: A massive mock exercise on steps to be taken in the event of an earthquake was conducted simultaneously in all 26 districts of the state, including the capital complex, on Tuesday.
The ‘mega mock exercise’ was organised by the disaster management department, in collaboration with the National Disaster Management Authority. It was supported by the State Disaster Response Force, the Indian Air Force, the Border Roads Organisation, and other stakeholders.
A coordination and orientation conference in this regard had been held on 30 January, which was followed by a ‘tabletop exercise’ on Monday.
As a part of Tuesday’s mock exercise, an alarm for earthquake was sounded at 10 am across the state, the premise being that an earthquake of 8.5 magnitude, with its epicentre in Dibang Valley district, had hit the state.
The exercise unfolded with all stakeholders, led by the respective district administrations and line departments like the police, IPR, etc, along with Army and paramilitary forces, swinging into action.
Mock reports of damages to school buildings, hospitals, office buildings, roads and bridges started pouring in from all the districts and the capital at around 11 am. Mock casualties and injuries were also reported from all the districts and the capital.
These reports were received and compiled by the state emergency operating centre in the chief secretary’s conference hall at the civil secretariat here, monitored by the response officer, in coordination with the incident commander, the deputy incident commander, the operation section chief and the liaison officer.
The top administrative officers of the state, who were made nodal officers for the mock exercise, will act as such in a real-life earthquake scenario also. A total of 816 mock casualties and 11,507 mock injuries were reported from all the districts and the capital complex.
Briefing the media on the drill, Brig Kuldip Singh said, “The aim of this entire exercise was not only to assess the capability of the state and the districts but also for everyone to demonstrate the capability of India to manage a disaster of this size in such dire situation.”
“We had ensured that it is not only the whole of the state response but it’s a national response. That’s why you find everybody participated, from NDRF, the Air Force, Indian Army, BRO and CAPF. They all participated and assisted because it was what we call an L3 event. An L3 event is an event which is beyond the capacity of the state to manage and respond to,” Brig Singh said.
He said although there were “capability void and minor void,” the exercise was carried out satisfactorily overall.
Brig Singh explained some of the intricacies and situations that are expected to surface during and after an earthquake, and underscored the importance of disaster preparedness and diligent resource management.
Disaster Management Secretary Dani Salu informed that five sites – hospitals, schools, office buildings, residential campuses and bridges – were ‘targeted’ in every district during the mock exercise.
Disaster Management Director Abu Tayeng spoke on the gamut of activities carried out during the statewide mock exercise, and said the media and the information & public relations department – the latter was represented by Director Obang Tayeng and Deputy Director Denhang Bosai – are vital elements of such exercises.
A mock rescue operation for victims of chemical, biological, radiological and nuclear (CBRN) emergency was conducted by the NDRF in the secretariat complex.
GA Secretary Sadhana Deori, Finance Secretary Yeshi Wangmo Ringu, and DM Director Tayeng attended the exercise, along with officials of the secretariat. (With input from DIPR)